And they're off... to Jockey Boot Camp! The first-of-its-kind workshop, which was developed and presented by retired jockey Frank Lovato, Jr., offered an outstanding start for those who dream of becoming a jockey or exercise rider in the Thoroughbred racing industry. 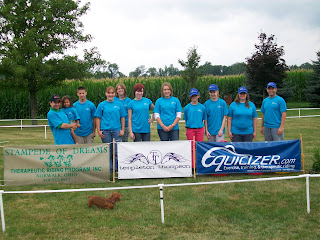 Recognizing the need for preliminary guidance for prospective jockeys in the United States, Lovato envisioned an entirely new concept: to launch a three-day workshop (which he dubbed his "Jockey Boot Camp") in which he personally would provide participants with a comprehensive introduction to the physical, mental, and occupational aspects of being a jockey or exercise rider. The inaugural seminar, which was held on August 1-3, 2009 at Frank and Sandy Lovato's home-based Wooden Horse Corporation in Norwalk, Ohio, was attended by Stephanie I. of New Jersey, Kayla J. of Michigan, Katie K. of Ohio, Tim L. of New York, Amanda L. of Pennsylvania, and Christi M. of Oregon

A unique feature of Lovato's training program is that no actual horses were involved. Lovato, a 25-year veteran of racing with an Eclipse Award, 1,686 victories, and over $41.7 million in earnings to his credit, is also the inventor of the Equicizer, a non-motorized mechanical horse that very realistically simulates the natural gaits of a live horse. Although Lovato originally created the Equicizer as a means of rehabilitating himself after suffering a serious injury on the track in 1981, it was soon discovered that the Equicizer provided a beneficial way to train and strengthen all riders, including those with disabilities. Equicizers are now owned and utilized by the world's most renowned jockeys and jockey schools; and for Lovato's Jockey Boot Camp, these creatively-designed mechanical steeds provided the participants with a safe introduction to the sport of racing. As the event commenced, a pair of Equicizers stood poised, ready for action, in front of a scenic Belmont Park backdrop at one end of the workshop where Lovato still hand-crafts his wooden horses. 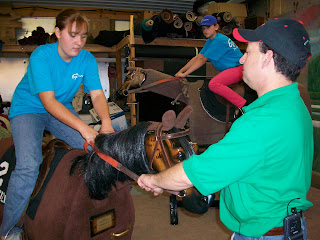 "Because of the Equicizer, I am approached by so many people each year who want to be jockeys but who have no idea of how to get started or what the career is really all about," Lovato said. He remembered one of his first students being Marjorie Clayton-Cordero, late wife of legendary jockey Angel Cordero. Over twenty-seven years ago, she came to his house daily to practice riding on "Johnny Dance," the very first Equicizer Lovato built. Lovato also recalled teaching Declan Murphy and Phil Teator, who both went on to win Eclipse Awards as leading apprentice jockeys, just as Lovato himself had achieved.

Of the Jockey Boot Camp attendees, "All of my students already had horseback riding experience, but nothing like what they will need to prepare them for riding racehorses," Lovato explained. "There is so much I can teach and a rider can learn without ever having the risk of them sitting on a real horse. It's like the saying, 'Walk before you run' -- I can lay down a strong foundation involving theory, balance, reining, position, and track etiquette in a safe, controlled environment. Every athlete has a means to practice and simulate the techniques of their particular sport prior to having to do it at the professional level. In the case of riding racehorses, riders typically are faced with the situation of undergoing on-the-job training without first developing basic skills or fitness, creating a huge risk and unnecessary dangers. Before there were Equicizers, beginners were learning these basic skills on powerful, rambunctious Thoroughbreds on the racetrack, which was not only placing themselves in danger, but also all of the other horses and riders around them."

Stated attendee Katie K., "This is the first time I've been on an Equicizer and worked really, really hard. I thought it was pretty fun! It was so much like a real horse, and I love riding horses and I haven't been able to do that (recently), and I did not want to get off! I'm like, 'I'm on it -- I'm gonna keep riding!' And then, of course, I got off and my legs were all shaky."

Amanda L. commented of her first Equicizer ride, "It's a lot more challenging than I thought it would be."

It is commonly said that jockeys are, pound for pound, among the most physically fit of all athletes; and the Equicizers did indeed challenge the endurance, strength, and coordination of the Jockey Boot Camp riders. Since the mechanical horses are suspended above stationary framework even while moving at a full gallop, they served as an ideal training device, enabling Lovato to remain alongside the horses every stride of the way and coach the students as they developed their racing skills and techniques.

"Frankie is a very nice man, and he does try his best to teach us how to be a jockey... He shows a lot of effort, and I can tell he was a very good jockey," said Stephanie I. 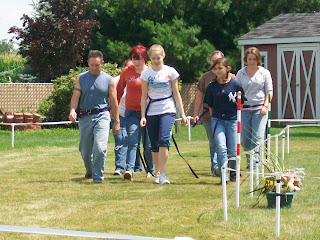 Besides practicing astride the Equicizers, the participants also performed various walkthrough lesson activities on a small-scale version of a one-mile racetrack complete with furlong markers and a finish line, which Lovato had assembled on a section of his rural property for the Jockey Boot Camp event.

"My model track is for students to rehearse and learn track rules of riding, both for morning workout traffic and racing situations and strategies," Lovato said. "All of this can be done on foot while I explain such things as safely entering and riding off the gaps, the hazard of clipping heels, maintaining safe racing positions, even performing tasks such as following a trainer's typical morning workout instructions like, 'Back up to the eighth pole, turn around and gallop, and work a half in 50.' Before the camp, the kids had no idea what any of those things meant, but they surely do now!" 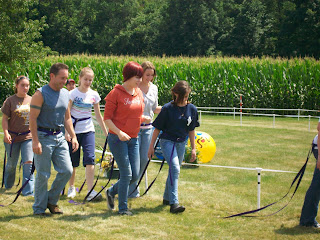 Stephanie I. stated, "I learned that when we race, we have to keep a big distance from our horse to the horses in front of us,(students wearing velcro belts signifying a horses heels in front of them to maintain that safe distance) because we could clip a horse's heels and our horse could stumble and fall." 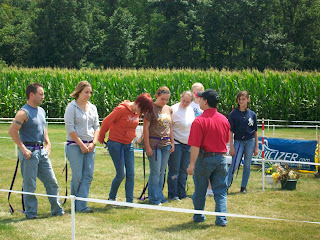 Lovato's imaginative lesson plan, filled with interactive activities, contests, and viewings of videos and televised races, held the students’ attention. The enthusiasm of the participants was evident in their quick friendliness toward one another and their eagerness to mount an Equicizer and cue it into action. 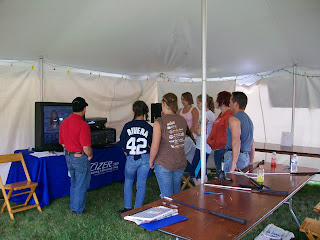 “It’s an amazing experience -- and it's only the first day!” exclaimed Amanda L. on the first afternoon of the event.

A movie night was enjoyed by the students and their parents. The feature film was distinguished jockey Laffit Pincay, Jr.'s "All About Winning," which Lovato admits still gets him choked up every time he watches it. "Laffit's story truly shows every bit of the dedication, desire, and danger involved in being a jockey -- something the students need to aspire to and measure up to if they truly want to become a jockey."

Beyond the physical aspects of the sport, Lovato also presented information on other significant topics pertaining to the business of horse racing, such as proper weight management and nutrition; work ethics; obtaining a jockey's license; and negotiating professional relationships with trainers, owners, grooms, hotwalkers, and spectators. 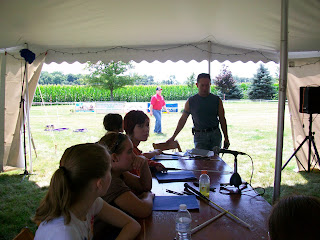 In addition to the personal knowledge and instruction shared by Lovato, the attendees received advice via telephone conferences with some of the most recognizable individuals in racing, including Hall of Fame jockeys Pat Day, Chris McCarron, and Mike Smith; accomplished rider James Graham; and successful trainer Michael Stidham.


Lovato commented, "I had an incredible lineup of the biggest names in racing supporting me for this event. I would like to thank all of those who offered to phone in: jockeys Angel Cordero Jr, Aaron Gryder, Chantal Sutherland, Laffit Pincay, Jr., Julie Krone, Richard Migliore and trainer Steve Asmussen." He explained that due to time limitations, "I literally ran out of time to schedule all of the calls with those who were willing to speak with my students."

Camp assistant Kate Harbert observed of the students and their progress after the first day of training, "Frankie can put them on the Equicizer and show them (how to perform a skill or technique), and then he can take them out onto the (small-scale) track and show them how to do it, and then he can talk them through it. There are just so many tools they can put in their toolbox and carry with them. I am so excited to see how they come along... They're learning today, and they keep learning more and more."

The students participated in a series of contests to earn points toward winning the grand prize of a complete racing saddle package. The challenge was won by Kayla J., with the runners-up being Christi M. and Tim L. 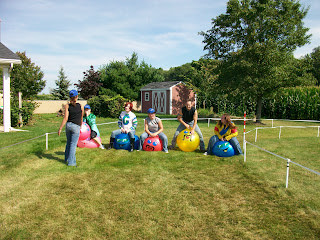 One of the fun activities was the Hipity Hop Derby where Christi took the lead and won! 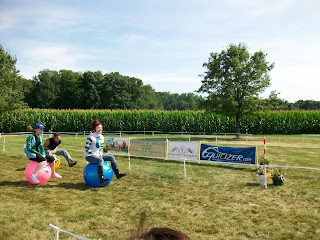 "The Jockey Boot Camp was sensational for the attendees and myself," Lovato stated. "I have to say that even for myself, it was a great learning experience and made me realize even more the need for such an event to be in place. It drives my passion even further to offer direction for those whose dream is to pursue a career as a jockey or exercise rider. The students all were so wonderful and showed me they have the desire and dedication to take it to the next level. If they are seriously considering this career path or thinking about enrolling in Chris McCarron's North American Racing Academy (NARA), this was a huge 'leg-up' for them! I am also producing a DVD called 'What it Takes to be a Jockey' for those who were not able to attend my workshop." He added, "We did make history with this event, and Sandy and I are already planning another one for next year. I have a page for the Jockey Workshop on my website (Equicizer.com or Exercisehorse.com) where people can read more about it and view photos from this event. We can also be contacted by e-mailing ;Equicizer@aol.com"

As a professional jockey, Lovato's last ride took place on September 19, 2004. But as his inaugural Jockey Boot Camp came to a close, he brought six more winners across the finish line... Six hopeful individuals who look forward to their continued journey into the exciting, competitive world of Thoroughbred horse racing.

Copyright © 2009 All rights reserved. The above article is the property of the Author and may not be duplicated or redistributed in any way without permission.

About the author:
Lori K. Black is a longtime horse enthusiast and Paso Fino owner with an appreciation for all breeds and disciplines of riding. She is an avid fan of Thoroughbred racing, the history of the sport, and the fascinating horses and people who bring Thoroughbred racing to life. Lori and her husband, Dan, reside in Berlin Heights, Ohio.E-mail: lkblack@centurytel.net
Posted by Frank Lovato Jr, Jockey World and the Equicizer at 5:05 AM 1 comment: 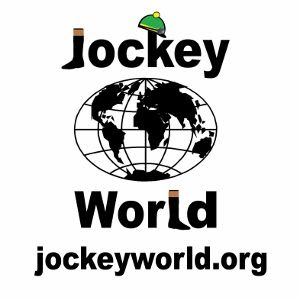 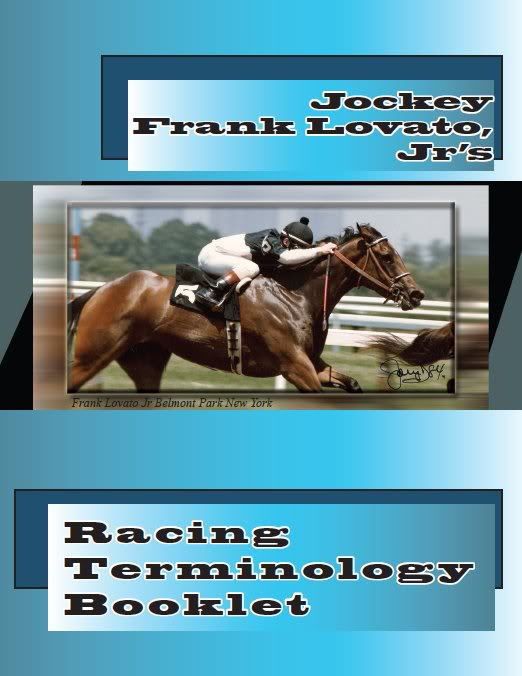 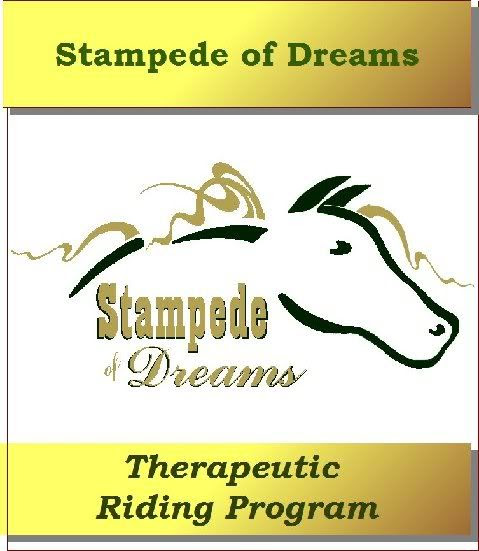