When One Dream Leads To Another

When One Dream Leads To Another "All through horses" 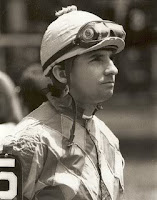 Since the age of three, there was nothing else I dreamed about more than being a jockey. There was no other plan or anything else I could ever imagine doing with my life. The speed, the danger, mud flying as I raced down a track astride 1,000 pounds of racehorse were things for which I yearned. Everything went according to plan, and all of my hard work and determination paid off: By the age of 16, I had begun my career as a professional jockey; and by 17, I was the nation's top apprentice and ranked among the top ten jockeys in North America. However, in 1981, at the age of 18, something on which I had not planned was a racing accident that left me with a badly broken leg.

Once I had begun my rehabilitation process, it became evident that the equipment and exercises I was using to regain mobility and strength were not specialized enough to provide the type of rehabilitation necessary to enable me to return to riding horses. That's when I had a great idea: I will make a horse. And that's just what I did! 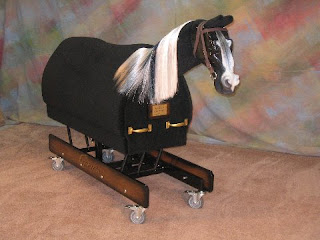 I built a horse of wood and springs, and there was nothing else like it in the world. Although I still was unable to walk without the use of crutches, I was now able to ride! I was able to safely get in riding positions and gently move my wooden horse by working the muscles and joints I would use to ride an actual horse. Through this process, my injured leg was becoming stronger and more flexible, and that gave me the confidence to know when I was ready to again ride a real horse. When I went for my final checkup and x-rays, my doctor was exceptionally pleased with my strength and condition. He gave me the OK to start riding horses again, and I said that I had already been riding for three months! The look on his face was priceless -- I did go on to explain I had been riding my wooden horse.

I never imagined I would be building wooden horses for other people; but word spread fast, and jockeys and representatives from jockey schools began contacting me from all parts of the world. This eventually led to establishing the Wooden Horse Corporation, which my wife Sandy and I formed in 1990, and officially naming my wooden horse the Equicizer. At this point I was still maintaining my career as a jockey; making Equicizers was just a hobby and side job that I really enjoyed. But again, something I never imagined would stem from the Equicizer was the discovery of its usefulness as a therapy tool for those who have physical or developmental disabilities.

Therapeutic horseback riding programs began learning of the Equicizer and also began placing orders. Because of this, Sandy and I would become very friendly with many wonderful people in this line of work and passionate about their purpose. And as we began seeing the benefits and rewards resulting from their work, it was not long before this would become a new dream for Sandy and me: to create our very own therapeutic riding program.

In late 2004 my 25-year career as a jockey was complete, and I stepped away from racing. The Equicizer business was established, but our dreams were now revised. Sandy and I moved from New York back to her hometown of Norwalk, Ohio in 2006. Once here, Sandy met a new friend, Amy Leibold, who also had a vision of starting a therapeutic riding program. Sandy, Amy, and I rallied with other wonderful people within the community and began developing the foundation of the Stampede Of Dreams Therapeutic Riding Program. 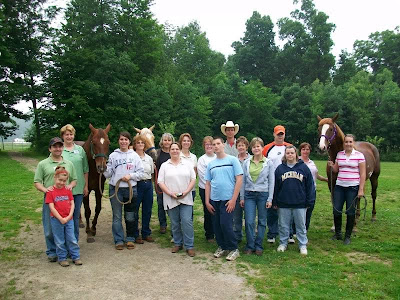 Our new dream has come true: In June of 2009, Stampede Of Dreams Therapeutic Riding Program officially launched its first session with students and lessons. Sandy holds the reins as head instructor, NARHA-certified, mentored by our dear friend and awesome horseman, NARHA-certified instructor Jesse Howell. The mission of the program is to offer students with physical and emotional disabilities the opportunity to learn companionship, responsibility, leadership, and vocational and educational skills, as well as to enjoy the physical benefits horseback riding provides.

Currently our program has three live horses. They are boarded at a local horse farm with an indoor arena where the Stampede of Dreams sessions take place. 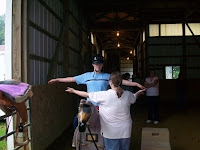 With great pride, the Equicizer is also used throughout the program for conducting all evaluations and introductions, as well as for practicing proper mounting and dismounting, performing warm-ups prior to all rides, and reviewing and practicing the skills which the riders will perform during the day's lessons aboard the real horses.

So this journey of mine started when I was a small child with the dream of becoming a jockey. Some misfortune along the way, in the form of a racing injury, led to my creating the Equicizer as well as to new paths and dreams. The Equicizer also took new paths which led to its being used for such meaningful purposes so different from that for which it was first intended.

My life is now in a new place so very far away from where I first started, back when I wanted to fly dangerously down a racetrack aboard the fastest racehorse. Sandy has watched me perform on the track for many years; now it's my turn to watch and assist her as she does her magic along with our staff and volunteers, working with our riders and horses. I am now in a place where achievement comes from giving a child with a disability the chance to have that feeling of freedom, accomplishment, and being so alive astride a horse. Witnessing the riders' triumphs provides a feeling for me that is just like winning a race. Although there is no grandstand or roaring crowd, still... "They're off!!!" ...in a Stampede Of Dreams! 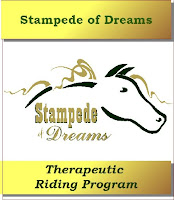 Stampede Of Dreams is in the process of attaining its 501(c)3 non-profit status and currently operates through volunteer work, donations, and fundraising efforts to care for the horses and manage other expenses. For more information, please visit: StampedeOfDreams.org or email Sandy Lovato: info@stampedeofdreams.org

Posted by Frank Lovato Jr, Jockey World and the Equicizer at 9:14 PM

This is a WONDERFUL story! And knowing the people involved makes it that much better! Kudos to you Frankie and Sandy for making such a positive impact on the world! I love you both! Darcy

It is a privilege to know the Lovato's. To see their passions, dreams and good works come to fruition. It was one my dreams to own an Equicizer. DaVinci (my EQ) has been the cornerstone of my own physical rehabilitation for over 2 years, and a daily joy to "ride".
Bravo!!!
Candi Ramer

So... my comment went out under my husband's Arthur's account, so I think it is only fair that I send out his comments from mine...
He says, the Equicizer is the best horse ever. He's perfectly trained! He never has a bad day. Has never thrown me to ground, and broken my bones, doesn't need the farrier, the vet, the equine dentist, never needs hay or the pooper scooper. He never rolls in...well, we all know what horses roll in! He lives in the house and is the most popular guest at any gathering. He's absolutely gorgeous and was reasonably priced.
The perfect horse!
Arthur Ramer